VR/AR: A Game-Changing Tool for Sales and Marketing

Now is the time to create and/or implement your AR/VR strategy.  Start by asking these questions: Where could VR/AR have

the greatest impact in my organization: customer acquisition, customer retention, or customer growth?  How will my colleagues and I learn more about the VR/AR ‘Art-of-the-Possible’?  Read the rest of the article.

Return to the VR/XR/AR Resource Center

For additional information about ISM‘s VR/AR Strategy services, schedule a chat here, or e-mail us at contact@ismguide.com.

How AR Glasses Could Benefit The Blind

When we think about AR glasses, we mostly think of them as smart glasses that can view our real-world environment and then super-impose data, information, and enhanced images about objects we are seeing in and around us.

It allows a person to ask the device to read the specific text a person wants to hear- things like headlines, specific menu items, and more. These types of smart glasses are great tools for the visually impaired or blind today, and for those who use them, the increased ease of everyday tasks has improved their lives.  Read the rest of the article.

AR For Hearing Is Making Strides, AR Glasses Are Still A Far Off Dream

Most of us are already familiar with AR in our world today. For example, typical hearing aids augment the ability to hear better.  Adding AR to eyeglasses will be the most difficult problem to solve related to augmenting vision.  Read the rest of the article.

Our forward-thinking clients are leveraging private digital communities to foster engagement with their customers. These collaboration communities are integrated tightly with your CRM system and data management platform leveraging VR, AR, and other emerging technologies to support and engage customers.  Read the rest of the article.

As a technology analyst since 1981, I have attended thousands of press conferences and events worldwide. In some 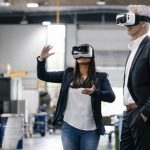 cases, I flew thousands of miles to attend these events in places like Beijing, Athens, Berlin, Amsterdam, London, Paris, Geneva, and various other regions in Asia and Europe. Many were in the US and hundreds more in Silicon Valley. In almost all cases, I attended them in person.  Last week, I took part in what may be the next significant way people experience media events and business meetings of all nature, thanks to a new VR application called Arthur.  Read the rest of the article. 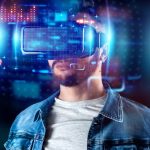 As I was contemplating Apple’s AR/VR strategy, this conversation with Apple back in 1984 kept coming to mind.  Steve Jobs made it clear to me that while Apple did make computers, it was really a software company and his goal was to use software to advance user interfaces and applications that were easy to use by everyone.  As Jobs told me then, Apple was and is even more so now a software company. Yes, they do innovative hardware but this hardware exists to take full advantage of Apple’s advancements in OS and UI design.  Read the rest of the article.

The Real Significance Of AR VR and Mixed Reality

Can Augmented Reality Make Everyone Experts?

AR and VR and mixed reality software and glasses can help one become proficient in a lot of areas where years of training used to be needed …  Read the rest of the article.

This Is Augmented And Mixed Reality’s Essential Missing Ingredient

If you’ve been watching this space recently, you’ve probably heard talk of a third technology called mixed reality, or MR. It’s similar to augmented reality in that it mixes virtual with real-world scenes, but does so in more concrete ways. Mixed reality is essentially an attempt to bridge the gap between VR and AR.   Read the rest of the article.

Apple stands to have the most impact over the next two to five years. Apple’s introduction of ARKit, its new mobile platform for iOS 11 designed to make developing augmented reality apps easier, is set to revolutionize the user experience on the iPhone and iPad.  Read the rest of the article.

I love Virtual Reality But I’m Also Afraid Of It

Could virtual reality be dangerous?  John Hanke worries that it could.  And he should know: Hanke is the CEO of Niantic, the company primarily responsible for the Pokemon Go phenomenon that struck.  Read the rest of the article.

This Technology Could Replace The Keyboard And Mouse

After three decades of mouse-and-keyboard computing, we’re on the precipice of the next major advancement in user interfaces: Virtual and augmented reality, or VR and AR.  Read the rest of the article.

For additional information about ISM‘s VR/AR Strategy services, schedule a chat here, call (301) 656-8448, or e-mail us at contact@ismguide.com.

Since 1985, ISM has pioneered the design and implementation of customer-centric strategies in the areas of sales, marketing and customer service. The world’s best companies have recognized ISM as the leader in applying state-of-the-art technologies and techniques to drive customer acquisition, retention and growth.

Led by Founder and President Barton Goldenberg, companies, non-profits and government agencies will receive hands-on guidance from one of the most experienced teams in the world.

Learn how Walmart, Ikea and many big companies use VR and AR to gain more customers, more sales and success. Subscribe and get access to over 50+ use cases.