Read What Others Are Saying

Social CRM is already enabling innovators to engage customers far more effectively and to craft customer-centric strategies and offerings that deliver unprecedented value. Now, the industry’s leading expert offers a proven methodology for making it work in any organization: B2B, B2C, or B2B2C.

Goldenberg shows how to systematically harvest information from any online conversation and community, integrate it into customer profiles, and use it to enhance customer engagement and to seamlessly personalize better interactions and offers across your entire business.

To see a video preview of Barton’s new book and to learn more about the power of Social CRM, please click here 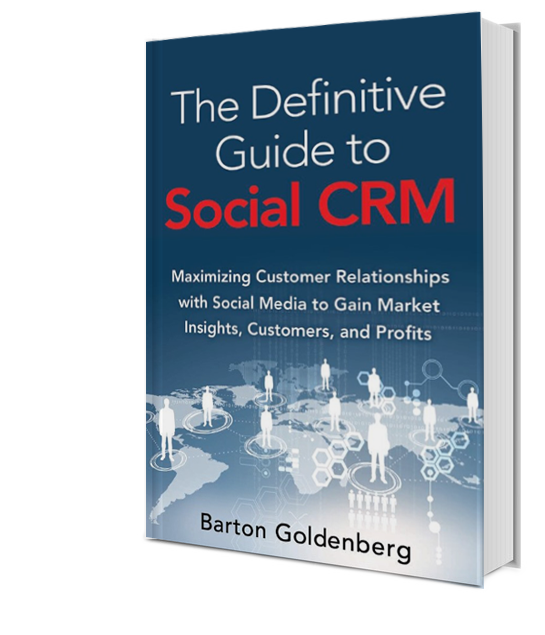 Purchase the book from one of these online retailers:

Barton J. Goldenberg is a globally respected and influential customer-centric strategist, author, speaker, and futurist. For 31 years he has been in the forefront of CRM with his methodologies to ensure the success of customer-centric initiatives widely recognized as industry standards. He was one of the three initial inductees to the CRM Hall of Fame in 2003, and he has been the recipient of numerous industry awards.

Barton’s earlier books, CRM Automation (Prentice Hall) and CRM in Real Time (Information Today) have been adopted as industry guidelines. With global, best-in-class clients, Barton’s in-the-trenches experience has made him a sought-after speaker, for example, at Gartner, Dreamforce, and Selling Power; and writer, including as a long-term columnist for CRM Magazine and as a frequently quoted source for the trade and business media.

Barton lives in Chevy Chase, MD with his wife and two teenage children. He is an avid Chesapeake Bay and blue water sailor and Rotarian, currently serving as Area Governor for his local district.

Since 1985, ISM has successfully designed and implemented CRM, Digital Customer Community, and Metaverse initiatives for the world’s best companies. We apply state-of-the-art technology and techniques and work with sales, marketing, and customer service executives to drive higher customer acquisition, retention, and growth. Led by Founder and President Barton Goldenberg, companies, non-profits and government agencies will receive hands-on guidance from one of the most experienced teams in the world.